The rules of etiquette relating to formal clothing have been developed over many years of differing styles of fashion and modes of dress. The guidelines that follow will help you to interpret the various terms that may appear on your invitation or ticket.

But first, some interesting background info.

In Victorian times, a gentleman when dining out or visiting the theatre in the presence of ladies would always wear formal attire consisting of black evening tail coat, black top hat and white gloves (as described later as "white tie"). Only when relaxing at his "club" might he relax sufficiently to allow himself to wear a smoking jacket.

All this changed on 10th October 1886 at the Autumn Ball of the Tuxedo Park Club in New York when the assembled leading lights of New York society were stunned by the entrance of a certain Mr Griswold Lorillard who was sporting a rather unusual SHORT jacket with satin lapels. What! No tails?

American society being what it was he was not thrown out, but actually won so many admirers during this first experiment that the jacket was adopted by a number of other Tuxedo Park members for formal occasions. Hence the "tuxedo" was born, designed by Mr Lorillard with the English smoking jacket in mind.

It was also America that gave us the white dinner jacket, made popular in the 1930's by Humphrey Bogart in the film "Casablanca".

(With thanks to Mr Stanley Barten of Hire News)

When 'black tie' appears on an invitation it is an indication that the guest is expected to wear formal evening dress. This usually consists of a dinner jacket, with matching trousers, most often in black. The dinner jacket will have satin lapels and trimmings to make it distinct from a lounge jacket, which is for daytime use.  The trousers should have a black satin braid down the length of the outer leg seam.

The dinner suit should be worn with a white dress shirt. The choice of collar style, either wing or standard collar, is optional and down to personal choice.  A black bow tie would be worn with matching cummerbund.  An alternative to the cummerbund is a waistcoat.  With a double-breasted jacket, neither is necessary.  Ideally, plain black patent or fine leather shoes should be worn.

For summer events, cruises etc, a white Tuxedo style dinner jacket can be worn in place of the black dinner jacket.

Although the term 'black tie' is often used to indicate the required mode of dress, the use of a black tie is nowadays not always strictly necessary. For less formal 'black tie' events, such as parties and celebrations, it is usually acceptable to be more adventurous with your choice of accessories. Colourful waistcoats, bow ties and cummerbunds are a popular way of adding a touch of spice and originality to the conventional dinner suit. However, if you will be attending a more formal event it is advisable to play safe and stick with black.

The most glamorous and romantic evening wear of all, 'white tie and tails' is not only worn to the most glamorous and romantic evening parties, but also to the most formal of evening occasions such as state banquets.  The white tie outfit consists of a black evening tailcoat, black dress trousers with a braid down the outer seam, and a wing collar shirt fastened with mother of pearl or gold studs and cufflinks.  The bow tie and waistcoat are both white pique (otherwise known as Marcella) to match the shirt front and shoes are as for black tie.  Those who want to look the full part would don a black top hat, a pair of white gloves and even a black cloak and a black cane.

Otherwise known as top hat and tails, morning wear is worn by male members of a wedding party e.g. Groom, Fathers of the Bride and Groom, Best Man and Ushers. Morning wear is also worn at other formal social events such as Royal Ascot, Royal Garden Parties, Trooping of the Colour, Investitures and other Royal or Court events. It may also be worn at society Funerals and Memorial services.

The traditional Morning Suit consists of a black or grey tailcoat worn with striped (for the black) or matching plain (for the grey) trousers. A waistcoat or vest (back-less waistcoat) should be worn over a plain white shirt. In most cases either a tie or a cravat is acceptable, although a cravat is best worn with a wing collar on the shirt. A black or grey top hat should accessorise the suit, together with a pair of lightweight grey gloves.

For weddings, where the individual bride and groom can determine just how conventional their dress code should be (or not), alternative colours can be selected for the morning suit and accessories depending on current availability and fashion trends. A more colourful and expressive waistcoat is a very popular way of complementing the conventional morning suit and a wide selection is always available from your local branch of DAPPER Formalwear for Men.

Put the bow tie around your neck and slip one end through the other, fold the right end in half at the middle of the bulge and hold it in place.  Bring the other half over the top of the folded half and fold it mid-bulge too. Tuck it through behind the other half of the tie.  Tighten by alternately pulling both folded and single ends. Clear as mud? Have a look at the step-by-step diagrams (printing them out might help). 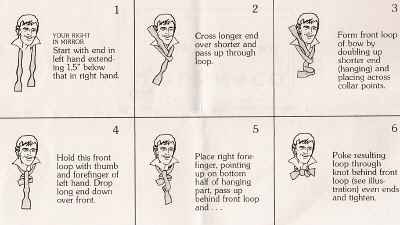 A lounge suit is worn at less formal occasions such as business meetings, interviews etc, where more formal dress is not necessary.  It often consists of a black, grey or navy jacket with matching trousers. A white shirt and a tie are also worn to complement the suit.

Depending on the setting, the dress code changes for these occasions.  At garden parties, you would wear a morning (see MORNING WEAR) or lounge suit (see LOUNGE WEAR), unless you have a service uniform or national dress.

At functions such as a state banquet and the state opening of parliament, dress is very formal.  You must wear white tie, or national dress.  Decorations are worn.  These occasions are chances to wear your best and most prized possessions.

Royal Ascot is the most prestigious event of the racing calendar, and although the public is able to purchase tickets for the royal enclosure, it is a very formal occasion at which no exceptions are made regarding dress.  Anyone who arrives improperly dressed is simply not admitted.  You should wear traditional morning wear (see MORNING WEAR) and although service dress is acceptable, it is rarely worn. The current dress code will be found at the Royal Ascot website.

The sleeves of any jacket should reach the base of the hand when the arms are straight by the side.  The collar should fit closely round the back of the neck with about half an inch of shirt collar showing above the jacket.  Shirt cuffs should show a little below the jacket sleeves. Jackets such as the dinner jacket and lounge jacket, should be long enough to cover the seat of the trousers, and should hang evenly all round.

The bottom of the trouser leg rests on the front of the shoe and should be slightly longer at the back.

THESE ARE GUIDELINES ONLY AND MAY BE ADJUSTED FOR PERSONAL PREFERENCE

IF NO DRESS CODE IS SPECIFIED ON THE INVITATION OR TICKET, THEN IT IS ADVISABLE TO CHECK WITH THE ORGANISERS BEFORE ATTENDING

Offering a mobile fitting, delivery and collection service, covering North and East London,Essex,Herts and surrounding areas ONLY. This service is not affiliated with our shops in Dorking or Surbiton.
Call or email Ray for full details:
Email: mobileservices@dapper.co.uk
Tel: 07884 384250